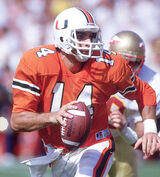 Testaverde was the first overall draft pick of the Tampa Bay Buccaneers in the 1987 NFL draft.[2] He has played in two Pro Bowls (in 1996[3] with the Baltimore Ravens and 1998[4] with the New York Jets) in twenty one seasons in the NFL.

In 1988, Testaverde became the Bucs' starting quarterback, with a 47.6% completion rate for 3,240 yards and 15 touchdowns, and 35 interceptions. During his tenure in Tampa, Testaverde received taunts from fans and radio personalities about his color blindness. In 1988 a radio station in Tampa rented a billboard that had Testaverde standing in front of a blue background. The billboard read: "Vinny thinks this is orange!"[5] The high number of errors caused his intelligence to be called into question. National Football League Players Association president Gene Upshaw, unaware that his comments could be heard by anyone viewing through a direct satellite uplink, once commented during an NFL Live! commercial break that Testaverde was so dumb that he would drag the electric cord through his swimming pool while trimming the hedges, and claimed to himself be a better quarterback (Upshaw was a retired offensive guard) than Testaverde.[6] His numbers continued to improve, and in the 1992 season, his last with Tampa Bay, he threw for a 57.5% completion rate for 2,554 yards, 14 touchdowns, and 16 interceptions.

Testaverde signed as an unrestricted free agent with the Cleveland Browns in 1992. After spending half a season as a backup to his Miami Hurricane teammate Bernie Kosar, he became the starter after Kosar's release by then Browns coach Bill Belichick. Testaverde spent three seasons in Cleveland, and in 1994 led the team into the playoffs where they won the AFC wildcard game against New England before being defeated by Pittsburgh. After 1995, he moved with the Browns to Baltimore and played two more seasons with the newly-renamed Baltimore Ravens. Testaverde made his first Pro Bowl appearance in 1996 with the Ravens.[3]

Said football statistics site Football Outsiders of Testaverde's unlikely 1996 season, "The real reason the Ravens ranked first in rushing [efficiency] was, believe it or not, Vinny Testaverde, who was out of his gourd as a scrambler that season. Ignore the official stats and take out the kneels, and Testaverde had 197 yards on just 23 carries, 8.6 yards per carry. He scrambled seven times on third down with 5-10 yards to go and converted six of those. He scrambled six times on first-and-10 and gained a new first down five times. Testaverde had not rushed for 100 yards since 1992."[7]

In 1998, his first season with the Jets,[8] Testaverde flourished, completing 61.5% of his passes with 29 touchdowns, seven interceptions, and a 101.6 Quarterback rating. In arguably his best season in the NFL, he led the Jets to the 1998 AFC East title and then to the AFC Championship game, where they lost to the eventual Super Bowl champion Denver Broncos. The Jets had Super Bowl hopes going into 1999, but unfortunately Testaverde suffered a ruptured Achilles tendon in the first game[8] and did not play the rest of the season, as the Jets narrowly missed the postseason without him.

In 2000, however, he returned to quarterback the Jets. The highlight of the season was the "Monday Night Miracle" game against the Miami Dolphins on October 23, 2000, selected by fans as the greatest game in Monday Night Football history.[9] In that game, the Jets fell behind 30-7 going into the fourth quarter, but came back to win the game, 40-37 behind five touchdown passes from Testaverde, including one each to Laveranues Coles, Jermaine Wiggins, Jumbo Elliott, and two to Wayne Chrebet.

In 2001, he led the Jets back to the playoffs, where they lost in the first round to the Oakland Raiders. In 2002, he was replaced after a 1-3 start by Chad Pennington.[10] He made cameo appearances to take the last snap in both the playoff clinching game versus the Green Bay Packers and the 41-0 playoff win against the Indianapolis Colts. In 2003, he was assigned to a backup role behind Pennington, although he started the first six games due to Pennington's left wrist injury.

Despite his injuries, Testaverde's performance with the Jets endeared him to coach Bill Parcells, who retired from coaching in 1999. One year after Parcells was lured out of retirement by Dallas Cowboys owner Jerry Jones, he brought Testaverde to his new team in 2004.

Testaverde initially was signed to be a backup and mentor to young Cowboys quarterback Quincy Carter, but after Carter was abruptly cut by the Cowboys for failing a drug test, Testaverde was given the starting quarterback job. While many questioned Testaverde's ability to still play in the NFL, the protection schemes and play calling allowed him to showcase his arm, although with mixed results. He was able to throw for significant yardage, but led the league in interceptions, getting picked off on 4% of his passes. Dallas finished the 2004 season 6-10, tied for third and last place in the NFC East division.

Testaverde's one-year contract with the Cowboys expired early in 2005. The Cowboys chose to instead sign Parcells's 1993 number one draft pick, Drew Bledsoe, as their top quarterback, leaving Testaverde without a contract. Parcells cites Testaverde's presence in Dallas as having been important to the development of current starter Tony Romo.

On December 26, against the New England Patriots on the final ABC telecast of Monday Night Football, Testaverde set a new NFL record for most consecutive seasons with at least one touchdown pass, 19, by throwing a 27-yard pass to Laveranues Coles to secure the record. That pass is also notable as being the last touchdown pass thrown on Monday Night Football while it was still broadcast by ABC. The game was also notable because the Patriots sent in back-up quarterback Doug Flutie, making this the first game in NFL history in which two quarterbacks over the age of 40 completed a pass (Testaverde was 42, Flutie was 43).

On November 14, 2006, the New England Patriots signed Testaverde as a backup to starter Tom Brady (the only other quarterback on New England's roster at the time was Matt Cassel). Testaverde kneeled down for the final play in a victory against the Packers on November 19, 2006. Testaverde threw a touchdown pass to Troy Brown on December 31, 2006 against the Tennessee Titans, giving him at least one touchdown pass for the twentieth straight season, extending his NFL record. The Patriots defeated the Jets, Testaverde's former team, in the first round of the playoffs, and Testaverde took the last couple of snaps to run out the clock.

Testaverde wore #14 with the Patriots, the second time the number has been re-issued since Steve Grogan's retirement as P.K. Sam wore it earlier in the decade.Template:Citation needed

With Jake Delhomme out for the 2007 season due to an elbow injury he suffered in a Week 3 victory over the Atlanta Falcons, and David Carr out with a sore back, the Panthers signed Testaverde on October 10, 2007. Testaverde, wearing #16, started his first game with the team on October 14, 2007 against the Arizona Cardinals. In that game he threw a 65-yard touchdown pass to Steve Smith, extending his NFL record to 21 consecutive seasons with a touchdown pass.[12] After leading the Panthers to a 25-10 victory, the 43-year-old became the oldest starting quarterback to win a game in NFL history, and the third-oldest to start one. He has also thrown touchdown passes to 71 different players, also a record. On Sunday October 28, coach John Fox named Testaverde the starting quarterback against the Indianapolis Colts. In that game, Testaverde led the Panthers in the longest opening drive for a touchdown in franchise history, consisting of 18 plays and lasting for an unprecedented 11 minutes and one second. Despite winning time of possession in the first half of the game, the Panthers entered the locker room under a 3-point deficit. In the second half, Testaverde left the field with a sprained Achilles tendon, and was replaced by former Houston Texans quarterback David Carr. Ultimately, the Panthers lost 31-7. Reports said that Testaverde would be out for at least a week.[13]

On November 18, 2007, Testaverde and the Panthers hosted Brett Favre and the Green Bay Packers for their Week 11 matchup. With Testaverde at 44 years of age and Favre at 38 years of age, this was the oldest starting quarterback duo in any game in NFL history. The "Senior Bowl", as it was nicknamed in the media, was won by Favre's Packers 31-17.[14]

On December 2, 2007, Testaverde became the second oldest starting quarterback in NFL history at 44 years and 19 days old. He threw two touchdown passes against the San Francisco 49ers in the Panthers' win, breaking his own record for the oldest starter to win an NFL game. During this game, Testaverde and Dante Rosario became the passer/receiver duo with the largest age gap between them (20 years, 346 days) to connect for a touchdown.

Testaverde announced his plans for retirement on December 29, 2007 which would take effect after the final game of the season for Carolina on December 30.[15]

Panthers coach John Fox sent him into the game to take the final kneel-down snap in a game which the Panthers won 31-23 over the Tampa Bay Buccaneers, expectantly bringing to an end to the 44-year-old's 21-year NFL career at the same city he took his first professional snap. By the start of 2008, he made it official by announcing his retirement in January. He will, therefore, first be eligible for induction into the Pro Football Hall of Fame in 2013.

Testaverde holds several NFL records related to his longevity in the league, including the NFL record for having thrown a touchdown pass in 21 consecutive seasons, the most losses by a starting quarterback with 123, and throwing touchdown passes to an NFL record 70 different players. Also, he holds the second highest completion percentage in a single game during the regular season (at least 20 attempts) at 91.3% (21/23), in 1993 vs. the Los Angeles Rams (Kurt Warner is the first, with 24/26 for 92.3%).

* The Cleveland Browns moved to Maryland and became the Baltimore Ravens following the 1995 season. The Browns and Ravens legally have separate team records as part of the settlement of the city of Cleveland's lawsuit against the team and NFL.
∮ Testaverde's 46,223 career passing yards rank 7th all time, while his 275 passing touchdowns rank 8th all time in NFL history.[16]