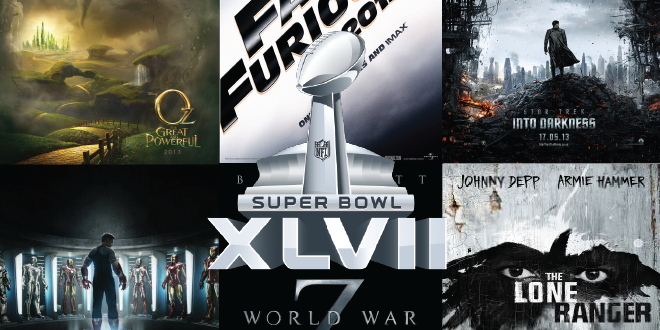 A 30-second advertisement during Super Bowl XLVII will cost you $4 million dollars, but for big budget Hollywood movies and their marketing campaigns, that is chump change! A grand total of six upcoming films will get the coveted Super Bowl treatment this Sunday, which means the public will see some brand new teaser trailers.

The movies that will spend $4 million on 30-second TV spots include Paramount's Star Trek: Into Darkness and World War Z, and Universal's Fast 6.

Disney, however, is really upping the ante by spending approximately $28 million on promoting three of their films. Both Oz: The Great and Powerful and Iron Man 3 are getting 63-second and 60-second teaser trailers, respectively, but it's Disney's trailer for The Lone Ranger that is taking the cake with a brand new 90-second TV spot!

Below are clips from the upcoming Oz, Iron Man 3, and Lone Ranger teaser trailers. You won't get to see the entire trailers unless you watch the Super Bowl on Sunday! Enjoy!