Robert K. Kraft (born June 5, 1941 in Brookline, Massachusetts) is an American businessman who is the Chairman, and Chief Executive Officer of The Kraft Group, a diversified holding company with assets in paper and packaging, sports and entertainment, real estate development and a private equity portfolio. However, his best-known holdings are the National Football League's New England Patriots and Major League Soccer's New England Revolution, as well as the stadium where they play, Gillette Stadium.

He is also currently on the Board of Directors of Viacom and the Federal Reserve Bank of Boston, and serves as a trustee of Boston College and as a trustee emeritus of his alma mater, Columbia University.

Kraft attended Brookline High School in his hometown, graduating in 1959.[1] He is a 1963 graduate of Columbia University, which he attended on scholarship, and received an MBA from Harvard Business School in 1965. While at Columbia, Kraft played on the school's lightweight football team. He is married to Myra Kraft, a 1964 graduate of Brandeis University and the daughter of the late Worcester, Massachusetts philanthropist Jacob Hiatt. Kraft grew up a New York Giants fan, prior to the founding of the Patriots franchise in 1960.

He began his professional career with the Rand-Whitney Group, a Worcester-based packaging company owned by Hiatt. He still serves as this company's chairman. In 1972, he founded International Forest Products, a trader of physical paper commodities. The two combined companies make up the largest privately held paper and packaging companies in the United States. International Forest Products is consistently among the top 100 US exporters/importers and in 2005 was No. 45 on the Journal of Commerce's list in that category.

Ownership of the Patriots

A Patriots fan since their American Football League days, Kraft has been a season ticket holder since 1971, when the team moved to the then-Schaefer Stadium.

In 1985, Kraft bought an option on the parcel adjacent to the stadium. The option would be the first in a series of steps which would culminate nearly a decade later in his eventual ownership of the team. Later, in 1988, Kraft outbid several competitors to buy the stadium out of bankruptcy court from Billy Sullivan for $25 million. The purchase included the stadium's lease to the Patriots – which would later provide Kraft leverage in purchasing the team.

In 1992, St. Louis businessman James Orthwein purchased the Patriots from Victor Kiam, who was facing bankruptcy and was indebted to Orthwein for several million dollars. For the next two years, rumors of a Patriots move to St. Louis were rampant, based on the fact that Orthwein wanted to return the NFL to his hometown – a city that had lost the Cardinals in 1988.

Finally, in 1994, Orthwein offered Kraft $75 million to buy out the remainder of the team's lease at the Foxboro Stadium, which, if Kraft agreed, would free Orthwein to move the Patriots to St. Louis. However, Kraft not only refused the offer, but made a bold counter-offer – a then NFL-record $175 million for the outright purchase of the Patriots, a surprising move in that the Patriots were, at the time, among the NFL's least-valuable franchises. As Kraft had the stadium lease as leverage, Orthwein had little choice but to accept Kraft's counter-offer.

The day after the NFL approved the sale in January 1994, Patriots fans showed their appreciation by purchasing almost 6,000 season tickets en route to selling out every game for the first time in the team's 34-year history. Every home game has been sold out since. The Patriots responded by putting together a seven-game winning streak to end the 1994 season, making the playoffs for the first time since 1986. In 1996, Kraft founded the New England Revolution, a charter member of Major League Soccer which began playing alongside the Patriots at Foxboro.

After stadium plans that included revamping the area in Foxboro and several in and around the Boston area met a host of obstacles and fell through, the Patriots nearly moved to Hartford, Connecticut in 1999. They reached an agreement with then Connecticut Governor John G. Rowland to move to a new stadium intended to be the cornerstone of downtown redevelopment. After Rowland lobbied the Connecticut legislature to approve state funds for the stadium the Patriots were given another opportunity to resume negotiations with the Massachusetts legislators who had initially balked on paying for site improvements for a new stadium in Foxboro. At the last minute the Massachusetts legislature approved the subsidies and hurdles were cleared for what became Gillette Stadium in their longtime home of Foxboro. The $350 million stadium, privately financed by Kraft, opened in 2002 as CMGI Field, before financial difficulties for CMGI resulted in Gillette taking over naming rights.

In 2007, Kraft announced plans to develop the land around Gillette Stadium, creating a $375 million open-air shopping and entertainment center called Patriot Place. The development opened in stages through 2007, 2008, and 2009 and included "The Hall at Patriot Place," a multi-story museum attached to the stadium, and the "CBS Scene," a CBS-themed restaurant.

In Kraft's first 17 seasons as team owner the Patriots have won 180 regular season games and 17 playoff games (including Super Bowls XXXVI, XXXVIII and XXXIX). The team will reach a milestone 200th win under Kraft ownership with their third win of 2011.

In 2005, a minor international incident was caused when it was reported that Russian President Vladimir Putin had inadvertently taken one of Kraft's three Super Bowl rings. Kraft quickly cleared up the misunderstanding, stating that he had given Putin the ring out of "respect and admiration" he had for Putin and the Russian people.[3] However, Kraft's wife Myra states that the initial claim is true.

In November 2005, Kraft met with Rick Parry, the Chief Executive of English Football]] team Liverpool. Kraft was rumoured to be interested in investing money into the 2004-05 European Champions. Kraft told BBC Radio Five Live: "Liverpool is a great brand and it's something our family respects a lot. We're always interested in opportunities and growing, so you never know what can happen." Eventually, however, the club was sold to American duo George Gillett and Tom Hicks.[4]

Robert and his wife Myra have donated tens of millions of dollars to a variety of philanthropic causes including education, child and women issues, healthcare, youth sports and American and Israeli causes. Among the many institutions the Krafts have supported are Columbia University, Harvard Business School, Brandeis University, The College of the Holy Cross, Boston College, Tufts University, the Belmont Hill School, the Boys & Girls Clubs of Boston, and the Dana Farber Cancer Institute in Boston. One of their most distinctive projects is supporting American Football in Israel, including Kraft Family Stadium in Jerusalem and the Kraft Family Israel Football League. In 2007, in recognition of a gift of $5 million in support of Columbia's intercollegiate athletics program, the playing field at Columbia's Lawrence A. Wien Stadium at the Baker Field Athletics Complex was named "Robert K. Kraft Field." 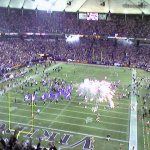