Robert Griffin III (born February 12, 1990) is an American football quarterback who currently signed with the Baltimore Ravens of the National Football League (NFL). Griffin, who was the starting quarterback quarterback at Baylor University from 2009 to 2011, won the 2011 Heisman Trophy. He was selected by the Washington Redskins with the second pick of the 2012 NFL Draft.[1]

Griffin had a successful rookie season with the Redskins, setting records for the highest passer rating and highest touchdown to interception ratio by a rookie quarterback, and leading the Redskins to the top of their division and their first playoff appearance in five seasons. He won the 2012 NFL Offensive Rookie of the Year award and although unable to participate due to a knee injury he suffered late in the season, was named to enter the 2013 Pro Bowl. However, Griffin was less successful during his subsequent tenure with the Redskins as he was plagued by injuries and poor performance.

After suffering a concussion during the 2015 preseason, Griffin was replaced by Kirk Cousins who played the rest of the season. He was released by the team following the end of the season, and signed shortly after with the Cleveland Browns. His tenure with the Browns was also plagued with injuries, and he was subsequently released after one season. After spending the entire 2017 season as a free agent, Griffin signed a one-year deal with the Ravens in 2018.

Griffin was born in Japan, where his parents, Robert Jr. and Jacqueline, both U.S. Army Sergeants, were stationed. The family later lived in the U.S. State of Washington, and then moved to New Orleans, Louisiana, before finally settling in Copperas Cove, Texas in 1997.[2][3]

Griffin attended Copperas Cove High School, where he was a three-sport star in basketball, football, and track. He started at quarterback for two seasons. During his junior season, he passed for 2,001 yards and 25 touchdowns with two interceptions, while compiling 876 rushing yards for 8 touchdowns. He received first-team All-District 16-4A honors after the season. As a senior, he recorded 1,285 rushing yards, posting 24 touchdowns, and also passed 1,356 yards for 16 touchdowns with seven interceptions. In his senior season Copperas Cove finished with a record of 13–2, and lost in the championship game of the 2007 Class 4A Division I state playoffs. Over the two seasons, he rushed for a total of 2,161 yards and 32 touchdowns, while passing for 3,357 yards and 41 touchdowns with nine interceptions.[4]

Rivals.com, a college football recruiting service, ranked Griffin the fourth-best dual-threat quarterback in the nation and the 42nd-best player in Texas in the high school prospect class of 2008.[5] During the college recruiting period, Griffin was pursued by Stanford, Tennessee, Kansas, Nebraska, Houston, Tulsa, Illinois, Washington State, and Oregon. Griffin initially committed to play for the University of Houston under head coach Art Briles. When Briles left Houston to take the head coaching position at Baylor, Griffin switched his commitment and eventually signed a National Letter of Intent to play for Baylor,[6] in part because the university also had a top track and field program.Template:R

Griffin graduated from high school a semester early, after serving as class president and ranking seventh in his class.[7] He began attending Baylor University during the spring 2008 semester when he was 17 years old. As a member of the Baylor Bears track and field team, Griffin finished in first place in the 400-meter hurdles at both the Big 12 Conference Championship and the NCAA Midwest Regional Championship meets; he also broke the NCAA Midwest Regional 400-meter hurdles record. He placed third in the NCAA meet and also participated in the U.S. Olympic Trials, in which he advanced to the semifinals.[8] Griffin graduated in three years with a degree in political science and a 3.67 GPA, while appearing on the Dean's List twiceTemplate:R. During his final year of college sports eligibility, he we was studying for a master's degree in communication.[9]

As a true freshman playing for the Baylor Bears football team, he earned Big 12 Conference Offensive Freshman of the Year honors. Griffin started 11 of 12 games his freshman season. In the upset 41–21 victory over the Texas A&M Aggies, he recorded 13-of-23 passes for 241 yards, two touchdowns, no interceptions, and no sacks.[10]

Griffin garnered Big 12 Freshman of the Year honors from the league's coaches (who are not allowed to vote for their own players) as well as the media.

Template:Rellink Griffin sat out for the remainder of the 2009 season after sustaining an isolated tear to his ACL in the first half of the third game and his third start of his sophomore year. The Bears picked up a 68-13 victory over Northwestern State.[12]

Template:Rellink Coming into the 2011 season, the Baylor Bears were not expected to do well, being picked 6th in the Big 12 preseason poll.[14] The Bears opened the season with 15th ranked TCU. The Bears took a 47-23 lead into the 4th quarter, and were able to fight off a comeback after TCU gained the lead 48-47 briefly, only for Baylor to kick the game winning field goal and win 50-48. They pulled off the upset in large part to Griffin's performance, who passed for 359 yards, 5 touchdowns and a 77.8% completion percentage. On the game winning drive, Griffin also caught a key pass. Following the win, Baylor entered the AP Poll rankings for only the third time in the previous 15 seasons, at 20th,[15][16] and Griffin was considered by many to be a Heisman Trophy candidate.[17] After a bye week, Baylor shut out Stephen F. Austin State University 48-0 and Griffin went 20 of 22 (90.9%) for 247 yards and 3 touchdowns and ran for 78 yards.[18] In week 4, Griffin ushered Baylor to their third win, beating Rice University 56-31. Griffin completed 29 of 33 passes (87.9%) for 338 yards with 51 yards rushing and a touchdown.[19] In week five, against Kansas St. Griffin almost brought the bears to their fourth win, but lost 36-35 to Kansas St. completing 23 out of 31 (74.2%) for 346 yards, five touchdowns, and one interception. In week five against Iowa St. Griffin took Baylor to Iowa for their fourth win completing 22 out of 30 (73.3%) for 212 yards, one touchdown, and zero interceptions. He won the Heisman Trophy, becoming the first player from Baylor to win it. Griffin also led Baylor to a 10-3 record, including a 67-56 win over the Washington Huskies in the Alamo Bowl. With a combined 123 points, it stands as the highest scoring regulation bowl game in NCAA history. Due to the Alamo Bowl, Griffin became the first player since Tim Tebow in 2007 to win the Heisman, and not appear in the National Championship (#1 LSU faced #2 Alabama).

Griffin, who graduated with a Bachelor of Arts degree in political science with a 3.67 grade point average in December 2010, began pursuing a masters in communications in 2011.[20][21] On January 11, 2012, Griffin officially announced his intention to enter the 2012 NFL Draft.[22] 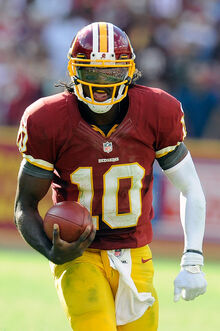 Griffin was not perceived as a first-round draft pick prior to his junior season.[30][31][32] By midseason, however, he had drawn the attention of NFL scouts and analysts, now being projected an early first round selection.[33][34] Towards the end of his junior season, Griffin had established himself as the No. 2 quarterback prospect for the 2012 NFL Draft, behind the unanimous first pick projection Andrew Luck.[35][36]

Griffin was widely projected to be the No. 2 pick of the draft, but the team originally holding the pick—the St. Louis Rams—had already selected Sam Bradford to be their long-term starting quarterback with the No. 1 overall pick in the 2010 NFL Draft. Wanting to stick with Bradford, the Rams decided to deal the pick prior to the draft, with the Cleveland Browns and Washington Redskins perceived as the most interested bidders. After a brief bidding process, the Redskins acquired the pick by giving the Rams four high-value draft picks over three years: their No. 6 overall pick in 2012, their second-round pick in 2012, and their first-round picks in 2013 and 2014.[37]

As expected, the Redskins selected Griffin at No. 2, making him the second Baylor Bear to be drafted this high in four years (after Jason Smith in 2009), but the first Baylor quarterback to be chosen second overall since Adrian Burk in 1950.

All values from the NFL Combine [38]

On March 24, 2016, Griffin signed a two-year, $15 million contract with the Cleveland Browns.[40][41] On August 8, 2016, Browns head coach Hue Jackson named Griffin the team's starting quarterback for the 2016 season.[42] Griffin was placed on injured reserve on September 12, after suffering a shoulder injury in the Browns' season opening loss to the Philadelphia Eagles.[43] He was activated off injured reserve on December 9, 2016, prior to Week 14 against the Bengals.[44] Griffin played in five games, all starts, in 2016, completing 87-of-147 passes for 886 yards and 2 touchdowns with 3 interceptions. He also rushed for 190 yards and two touchdowns.[45]

On April 4, 2018, Griffin signed a one-year contract with the Baltimore Ravens.[47]On September 2, 2018, Griffin was named the team's backup quarterback.

Robert Griffin III has family ties to New Orleans. His paternal grandfather, Robert Griffin I, was a foreman for a New Orleans construction company. He died in 1984 at age 43 from a brain aneurysm after suffering from glaucoma for several years.[48][49] Financial hardship caused the family to move to the Desire Projects neighborhood.

Griffin's father, Robert Griffin II, a talented basketball player at Kennedy High School, enlisted in the Army before he graduated.[49] While stationed in Fort Carson, Colorado, he met and later married Jackie Griffin (née Ross).[48] The couple were deployed to Okinawa, Fort Lewis, and Fort Hood, nearby where they eventually settled after retiring from the military.

At Baylor, Griffin met his fiancée Rebecca Liddicoat, a native of Boulder, Colorado.[50] 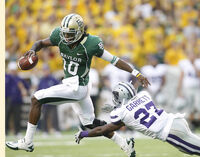 Retrieved from "https://americanfootball.fandom.com/wiki/Robert_Griffin_III?oldid=164502"
Community content is available under CC-BY-SA unless otherwise noted.