The North Carolina Tar Heels football team represents the University of North Carolina at Chapel Hill in the sport of American football. The Tar Heels compete in the Football Bowl Subdivision (FBS) of the National Collegiate Athletic Association (NCAA) and the Coastal Division of the Atlantic Coast Conference (ACC).

In Carolina's first 121 seasons of football competition, the Tar Heels have compiled a record of 646–488–54, a winning percentage of .566. Carolina has played in 29 bowl games in its history and won three Southern Conference championships and five Atlantic Coast Conference titles. Thirty Tar Heel players have been honored as first-team All-Americas on 38 occasions. Carolina had 32 All-Southern Conference selections when it played in that league until 1952 and since joining the ACC in 1953, has had 174 first-team All-ACC choices.[1] The team's most recent bowl appearance came in the 2010 Franklin American Mortgage Music City Bowl with a double overtime win against the Tennessee Volunteers; the final score was 30-27. Since joining the Atlantic Coast Conference in 1953, the team has won five conference championships, with the most recent title coming in 1980.

One very important contribution to the game of football by North Carolina is the modern use of the forward pass; they were the first college team to use the play in 1895. Bob Quincy notes in his 1973 book They Made the Bell Tower Chime: "John Heisman, a noted historian, wrote 30 years later that, indeed, the Tar Heels had given birth to the forward pass against the Bulldogs (UGA). It was conceived to break a scoreless deadlock and give UNC a 6–0 win. The Carolinians were in a punting situation and a Georgia rush seemed destined to block the ball. The punter, with an impromptu dash to his right, tossed the ball and it was caught by George Stephens, who ran 70 yards for a touchdown.”

While not a consistent football powerhouse, the North Carolina football program has had intermittent success and has featured a number of great players, many of whom have gone on to prominence in the National Football League, including Lawrence Taylor, Charlie Justice, Chris Hanburger, Ken Willard, Don McCauley, Jeff Saturday, Alge Crumpler, Willie Parker, Greg Ellis, Dré Bly, Julius Peppers, and Hakeem Nicks.

The football rivalry between Duke and North Carolina began in 1888, when Duke was known by the name of Trinity. Trinity won the first game in the now-longstanding series. While the two teams are more known for their basketball rivalry, they have been known to have some great games every now and then. The Victory Bell was introduced for the 1948 match-up, which North Carolina won 20-0. It's tradition for the school that has possession of the bell to paint the bell in the shade of blue of their school. The longest consecutive win streak in the series is a 13 game win streak by the Tar Heels from 1990-2002. The all-time series record is 55-35-4 (excluding the two Carolina vacated victories).

The Tar Heels' rivalry with the Virginia Cavaliers began in 1892, and the rivalry has come to be known as the "South's Oldest Rivalry." The teams played twice during the 1892 season, with the Cavaliers winning the first game and the Tar Heels winning the second. The two teams have played a total of 116 times, more than the two teams have played any other program. It is the fourth most played rivalry game among college football's major conference schools. The all-time series record is 58–54–4, in favor of the Tar Heels.

In July 2010, it was reported that the program was being investigated by the NCAA due to possible connections with sport agents.[4] The football program was also under investigation for academic fraud and a failure to properly monitor players, which the NCAA found to be true.[5] Seven players from the UNC football program, including starters and once top recruits Greg Little and Marvin Austin, were reported to have accepted more than $27,000 in impermissible benefits in 2009 and 2010.[5] Following an NCAA investigation into misconduct, in July 2011, head coach Butch Davis was fired [6] and replaced by interim coach Everett Withers. Also, in September 2011, the program decided to vacate all its wins from the 2008 and 2009 seasons, reduce its scholarship athletes by 3, begin serving two years of probation, and pay a $50,000 fine. [7] The NCAA later increased the penalties to a reduction of athletic scholarships by 15, three years of probation, and a post-season ban of one year.[8]

The 1947 Sugar Bowl, which pitted the Tar Heels against the Georgia Bulldogs, took place on January 1, 1947. The game was played in Tulane Stadium, which was located in New Orleans, Louisiana. Through the first quarter of play the game remained scoreless. Bob Mitten, a Carolina defensive player, intercepted a Bulldog pass, which eventually led to the first score in the Sugar Bowl. North Carolina scored first, in the second quarter of play, off a 4 yard run by Walt Pupa. After the successful PAT, the score was 7-0 in favor of North Carolina. The score remained that way until halftime. In the third period, Georgia's defensive right end, Joe Tereshinski intercepted a Tar Heel pass, on the Georgia 24 yard line. Tereshinki the lateraled the ball to his teammate, Dick McPhee who ran 52 yards, being tackled on the Carolina 14 yard line. The Tar Heels argued that the lateral was a forward lateral, but the referees thought otherwise. The Bulldogs capitalized on the turnover, by scoring on a 1 yard quarterback sneak, executed by Johnny Rauch. North Carolina retaliated with a 27 yard field goal, kicked by Bob Cox. North Carolina regained the lead, 10-7. Less than three minutes later, after the UNC score, the Bulldogs scored off a 67 yard pass from Trippi to Dan Edwards. However, the PAT was missed, leaving the score at 13-10 in favor of the Bulldogs. In the fourth quarter, Johnny Rauch scored the final touchdown of the game, this time off a 13 yard run. With the made PAT, the score was 20-10 in favor of the Georgia Bulldogs. The Tar Heels lost their first bowl game. 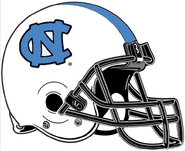 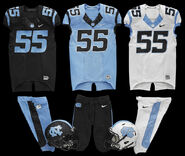 New Hydro-design alternate chrome helmet, which was introduced in 2012.

The primary helmets returned to the carolina blue /white facemask deign in 2017.

Around the front of second tier of stands in Kenan Stadium, there are strips of metal with names of former Tar Heel footballers with their numbers, these are the honored jerseys.

Tar Heels in the NFL

Tar Heels in the Drafts

Tar Heels in the NFL Draft

Tar Heels in the AFL Draft