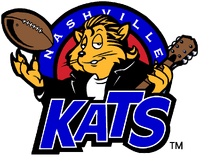 The team began as the Nashville Kats in 1997. The original Kats played in the then-named Nashville Arena (AKA "The Alley") in downtown Nashville. The team was named for the 1967 hit "Nashville Cats" by The Lovin' Spoonful. The team's logo featured an anthropomorphic tabby wearing a 1950s-style leather jacket, holding the neck of a guitar in one paw and juggling a football with the other.

The Kats were initially coached by Eddie Khayat in 1997 and 1998, who was succeeded by Pat Sperduto for the balance of the team's time in Nashville (including the second incarnation of the team). The Kats were the league's Organization of the Year for their inaugural year of 1997, and were in the playoffs for every season of their relatively brief existence. The team's success in the playoffs led to consecutive appearances in the ArenaBowl(XIV and XV) each of the original team's final two seasons, although they were unable to win the AFL's championship in either appearance.

After being unable to reach favorable agreements with arena management and the primary tenant, the Nashville Predators of the National Hockey League, majority owner Mark Bloom sold the franchise in December 2001 to Virgil Williams, an Atlanta businessman, for nearly $10 million. The team's departure from the Nashville market was not related to lack of success neither on the field nor at the box office, but rather their inability to negotiate a favorable lease with the Predators. Following the move to Atlanta, this team would be rechristened the Georgia Force.

Shortly after the original team's departure from Nashville, Bud Adams, the owner of the Tennessee Titans of the National Football League, purchased the rights to an expansion franchise in Nashville (along with the Kats identity). Initially, Adams was unable to negotiate a lease with the Nashville Predators to return the team to the Gaylord Entertainment Center (formerly Nashville Arena). Because Nashville Municipal Auditorium and Vanderbilt's Memorial Gym are unsuitable for arena football (Municipal Auditorium's floor was too small to contain the field of play and Vanderbilt had a dry policy for athletic events), Adams explored the idea of building his own mid-size arena (roughly 10,000 seats) to host the Kats and compete with the Gaylord Entertainment Center for concerts and smaller sporting events. Ultimately, the Predators agreed to a deal with Adams during the summer of 2004. Following the new agreement, Adams announced that the expansion Kats would begin play for the 2005 season and would return to the arena the original team called home.

While the majority of the new team was owned by Adams, country music singer Tim McGraw was brought in as a minority investor. McGraw, his wife Faith Hill, and their children were often seen on the first row of sideline seats along the south endzone. As a tie-in with McGraw, the PA system played his hit "I Like It, I Love It" following a Kats touchdown.

The second incarnation of the Nashville Kats began play in 2005 at the then Gaylord Entertainment Center, the home of the original Kats team. When the Kats were revived as an expansion team, the new team re-assumed from the Georgia Force all Nashville Kats history prior to the franchise's move to Atlanta. This was an arrangement similar to the one made in the NFL with the Cleveland Browns and in the CFL with the Montreal Alouettes. The revived logo was almost identical to the original logo. The noteworthy exceptions were the ball (which was drawn as the lighter colored, brown-with-blue-stripe ball used in the AFL at that time) and the color scheme of the logo, which was slightly modified to mirror the team colors of the Tennessee Titans. New team uniforms also adopted the Tennessee Titans color scheme, going from the dark blue/silver/white combination of the original team to a new scheme including "Titans" light blue/red/white. The new team also introduced a new in-arena mascot named Kool Kat, a cat clad in a jersey and shorts that often performed daredevil stunts during breaks in the game.[1]

The new Kats' first season started horrendously. After an opening victory on the road, it took until week 8 for the franchise to record another victory. But after that, the Kats won their next five games, and finished the season with a 6–9–1 record. The 41–41 tie at the Dallas Desperados on April 8 was only the second in AFL history, and prompted the League to change its overtime rules to eliminate ties before the start of the 2006 season.

Nashville finished the 2006 regular season with an 8–8 record; good enough to earn the team a playoff berth. The Kats lost in the opening round to the Chicago Rush.

The Kats finished the 2007 season with a 7–9 record and just missed the playoffs after a Utah Blaze win in the final week of the season.

On October 10, 2007, after months of speculation, owner Bud Adams decided to shut down operations for the second time in Nashville Kats history. While ticket sales had been good initially, the team struggled at the box office following its poor performance in the 2005 season (the first season of the expansion team).

Retrieved from "https://americanfootball.fandom.com/wiki/Nashville_Kats?oldid=199747"
Community content is available under CC-BY-SA unless otherwise noted.