UMass began play in 1879[1] and have since appeared in three FCS National Championship games, winning the title in 1998. The Minutemen began a two-year Football Bowl Subdivision transition period in 2011, becoming bowl eligible in 2013. In March 2014, the Mid-American Conference and UMass announced an agreement for the Minutemen to leave the conference after the 2015 season due to UMass declining an offer to become a full member of the conference.

UMass began playing football on November 22, 1879, when the school was known as Massachusetts Agricultural College, and the team was known as the "Aggies." They were first organized the previous fall by Francis Codman, but did not play their first game until November 22, 1879, defeating the Amherst College freshman team 4–0. As this was their only game that year, 1879 is noted as their first undefeated season, matched only by the 1889 season (2–0) and the 1963 season (8–0–1). Massachusetts later teamed up with Storrs Agricultural College (now the University of Connecticut) and Rhode Island College of Agriculture and Mechanic Arts (now the University of Rhode Island) to form the Athletic League of New England State Colleges for the purpose of scheduling football matchups between the schools. The first meeting between the Aggies and each of the other schools resulted in a shutout win for Massachusetts, as they defeated Connecticut, 36–0, in 1897 and Rhode Island, 46–0, in 1903. Massachusetts won their 100th game on October 2, 1920, topping rival Connecticut in a 28–0 shutout. The team played their 1000th game on November 11, 2000, losing to conference foe Delaware, 19–31. The team's nickname has endured several changes throughout the years. Though the official nickname remained "Aggies", "Statesmen" was also used interchangeably beginning when the school was renamed to Massachusetts State College in 1931. The nickname was officially changed to the "Redmen" when the name of the college became the University of Massachusetts in 1947.

Pittsburgh assistant coach Vic Fusia took over the Redmen football program in 1961 and under his tutelage, UMass compiled a record of 59–32–2.[3][4] The Fusia era included an undefeated 8–0–1 campaign in 1963 as well as records of 8–2, 7–2, 6–3 and 7–2 in the following years. However, two losing records in three seasons led to Fusia's dismissal after the 1970 season.[5] Denver Broncos linebackers and defensive backs coach Dick MacPherson, a former UMass assistant from 1959–1960, took over after Fusia's firing.[6] Under MacPherson, the Redmen compiled a record of 45–27–1.[7] In response to changing attitudes regarding the use of Native American-themed mascots, they changed their mascot in 1972 to the Minuteman, based on the historical "minuteman" relationship with Massachusetts; women's teams and athletes are known as Minutewomen.[8]

Whipple left college football for a position as an assistant coach with the Pittsburgh Steelers of the NFL in 2004.[11]

In 2004, Northeastern head coach Don Brown returned to UMass, where he'd served as defensive coordinator from 1998–1999 to take over as head coach.[12] During his tenure as head coach from 2004 to 2008, UMass posted the best five-year record in school history, 43–19. In his first year, he led the Minutemen to a 6–5 record, including victories over fourth-ranked Colgate, seventh-ranked New Hampshire, and ninth-ranked Maine. During 2005, Brown helped UMass to a 7–2 start and a final ranking of No. 19. That year, the Minutemen defeated fourth-ranked James Madison and handed Delaware their worst home loss in two decades, 35–7.[13] 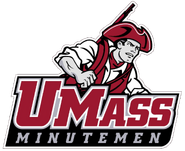