The London Monarchs were a professional American football team in NFL Europe and its predecessor league, the World League of American Football (WLAF). The Monarchs played their final season in 1998 as the England Monarchs. In 1999, they were replaced by the new Berlin Thunder.[1]

The WLAF operated in 1991 and 1992 and included six US teams, one Canadian team, and three European-based teams, including the Monarchs, that was organised in three divisions (North American West, North American East, and European Divisions). The WLAF suspended operations prior to the 1993 season, but was revived in 1995 as the World League, featuring six European-based teams, again including the Monarchs. The World League was renamed "NFL Europe League" in 1998. This league played its games in the spring so as not to conflict with the traditional American football season of autumn and early winter.

In 1991 and 1992 the Monarchs played their home games at the famed Wembley Stadium. In the 1991 season the team won the first World Bowl at Wembley, beating the Barcelona Dragons 21–0, the only team to have beaten them in the entire season. In the first season of the World League, crowds at Wembley averaged 40,483 for the five games. However dwindling interest – even with the advent of a new regional rivalry with the Edinburgh-based Scottish Claymores – forced the team to shift its home ground to White Hart Lane, home of Tottenham Hotspur F.C., when the league resumed play in 1995, and that year average attendance fell to 16,343.

Because of the comparatively small size of the pitch at White Hart Lane, special dispensation had to be applied for to use a shortened field and it was granted: the pitch at White Hart Lane measured 93 yards. In 1996, the Monarchs were forced to find an alternative venue for their final home game and chose Stamford Bridge, where they would play all of their home games in 1997.

Towards the end of the 1997 season, the WLAF was starting to re-evaluate the team's situation in its market, believing that the return to London had not been as big a success as hoped. In conjunction with general manager Alton Byrd, the team was rebranded the England Monarchs and travelled the country, playing home games at the Crystal Palace National Sports Centre in London, Ashton Gate (home of Bristol City F.C.) and Alexander Stadium, an athletics stadium in Birmingham – another step down in the size and quality of the stadiums used. This venture divided opinion dramatically amongst the Monarchs support and rather than increase interest in the team, attendances slumped to an average of 5,944. The announcement at the end of the 1998 season that the league would add a new team, the Berlin Thunder, led to weeks of speculation that either one of the existing teams would be shut down, or that the Monarchs and Claymores would be amalgamated into a single British team. Confirmation that the Monarchs were to close down came in July that year.

Like other WLAF/NFL Europe teams, most of the Monarchs' players were young American developmental players assigned from teams in the National Football League. The league paid these players' salaries, as well of that of the coaches, who tended also to be Americans, though there were exceptions – in the early Monarchs Walter McKone, D.O. was a team osteopath and Stewart Parkinson a team manager.

A few players of European extraction also participated, primarily as kicking specialists, although league rules required the participation of at least one player of European extraction on every other series of four downs. The league's points leader in 1991 was Phil Alexander, kicker with the Monarchs, who is currently Chief Executive of Crystal Palace football club. One exception to the "kicker phenomenon" was Victor Ebubedike (later Victor X Ebubedike, and later still Victor Muhammad) who played as running back for the Monarchs for a number of years, and who became the first European to score a touchdown (versus the Orlando Thunder) in 1991.

Notable players for the Monarchs included Stan Gelbaugh, William "The Refrigerator" Perry, Obafemi Ayanbadejo, Steve "Hollywood" Brooks, Kevin "Roly Poly" O'Brien, Tim Simpson, Doug Marrone, and Brad Johnson, a quarterback who would go on to win Super Bowl XXXVII with the Tampa Bay Buccaneers. Also of note was Dedrick Dodge, a special teams maven who went on to win a number of Super Bowl rings with the San Francisco 49ers and the Denver Broncos and LaVar Ball, a tight end whose sons play basketball, including Lonzo Ball of the Los Angeles Lakers, who was the second overall pick in the 2017 NBA draft. 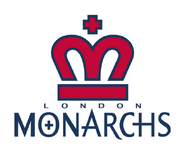 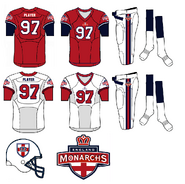