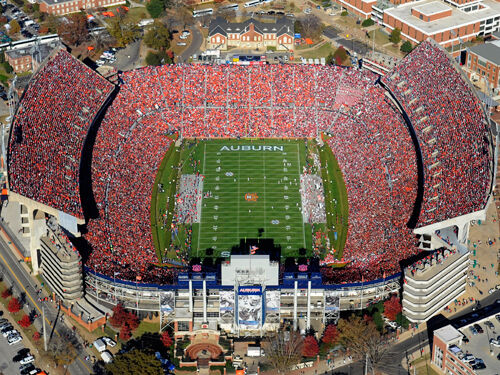 History: Pat Dye Field at Jordan-Hare Stadium, the nation's 10th-largest on-campus stadium, with a capacity of 87,451, is entering its 72nd year as home to the Auburn Tigers in 2011.

On football Saturdays in Auburn, Jordan-Hare Stadium becomes Alabama's fifth-largest city. More than 75,000 season tickets have been sold to Auburn home games in each of the last 18 years.

Legendary coach Pat Dye has also had his name forever attached to Jordan-Hare Stadium, as the turf officially became known as Pat Dye Field at Jordan-Hare Stadium prior to the 2005 Iron Bowl. Dye, who served as head coach and athletics director at Auburn from 1981-92 and was inducted into the College Football Hall of Fame in December 2005, led Auburn to a 99-39-4 record and four SEC Championships in his 12 seasons on the Plains.

Retrieved from "https://americanfootball.fandom.com/wiki/Jordan-Hare_Stadium?oldid=36392"
Community content is available under CC-BY-SA unless otherwise noted.