American Football Wiki
Register
Don't have an account?
Sign In
Advertisement
in: Pages with script errors, Articles which use infobox templates with no data rows, Safeties,
and 5 more 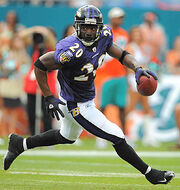 Ed Reed is a former safety of the National Football League. He is currently chief of staff for the Miami Hurricanes. He was drafted by the Baltimore Ravens in the 2002 NFL Draft. He set 3 NFL records with them, including a 107-yard interception return touchdown in the 2008 NFL season. He won Super Bowl XLVII with the Ravens. And after that, his contract expired, and signed with the Houston Texans. But his tenure with the Texans was short-lived, as he was released for them after getting 16 tackles with no interceptions, no passes defended, and even no forced fumbles. He signed with the New York Jets, when the Jets claimed off waivers. After the 2013, he spent the 2014 NFL season at free agency before retiring on May 2015, retiring as a Raven. He was elected into the Pro Football Hall of Fame on February 2, 2019, the day before Super Bowl LIII.