Calvin Johnson, Jr. (born September 25, 1985 in Tyrone, Georgia) is a former American football Wide receiver who played his entire 8 year career for the Detroit Lions. He spent three years for the Yellow Jackets at the Georgia Institute of Technology until declaring for the 2007 NFL Draft. He played his first season for the Yellow Jackets in 2004 as a wide receiver. Johnson has a rare combination of size (6 ft. 5 in., 239 lb/ 196 cm, 108 kg), speed (4.35 sec 40-yard dash), strength, leaping ability (more than 45" (114 cm) vertical), body control and hand-eye coordination. It is often mentioned that he is also a very humble and well-behaved person, exemplified by his building trip (see below), and his refraining from showing off or getting into confrontations on the field. On January 8, 2007, Johnson declared he will forego his senior year and enter the 2007 NFL Draft. Johnson was selected by the Detroit Lions as the 2nd pick overall in 2007 NFL Draft. 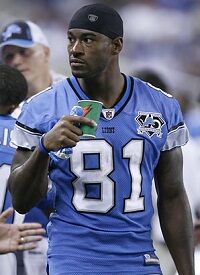 Retrieved from "https://americanfootball.fandom.com/wiki/Calvin_Johnson?oldid=189813"
Community content is available under CC-BY-SA unless otherwise noted.